Now that you’ve installed InfluxDB you’re ready to start doing awesome things. There are many client libraries available for InfluxDB, but in this section we’re going to use the built in user interface to get started quickly.

Logging in and creating your first database

If you’ve installed locally, point your browser to localhost:8083. The built in user interface runs on port 8083 by default. You should see a screen like this:

The default options for hostname of localhost and port of 8086 should work. The InfluxDB HTTP API runs on port 8086 by default. Enter the username root and password root and click Connect. You’ll then see a logged in screen like this:

Enter in a database name and click Create. Database names should contain only letters, numbers, or underscores and start with a letter. Once you’ve created a database you should see it on the screen:

Writing and exploring data in the UI

Go ahead and click the “Explore” link to get here: 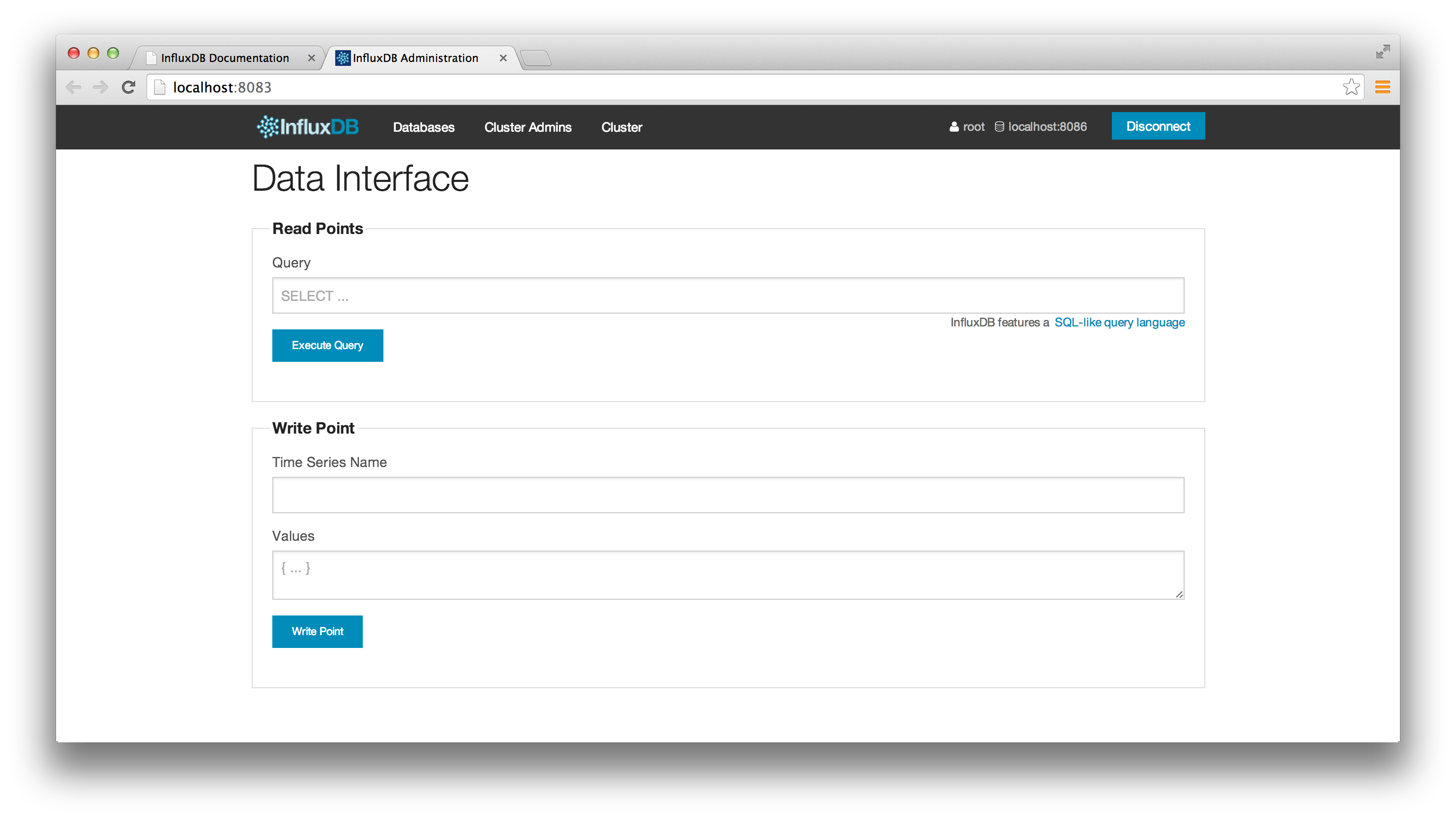 From this screen you can write some test data. More importantly, you’ll be able to issue ad-hoc queries and see basic visualizations. Let’s write a little data in to see how things work. Data in InfluxDB is organized by “time series” which then have “points” which have a time, sequence_number, and columns. Think of it kind of like SQL tables, and rows where the primary index is always time. The difference is that with InfluxDB you can have millions of series, you don’t have to define schemas up front, and null values aren’t stored.

Let’s write some data. Here are a couple of examples of things we’d want to write. We’ll show the screenshot and what the JSON data looks like right after.

If you’re writing data in the web UI, you need to put something like this in the Values textbox:

And now let’s look at what the resulting JSON would look like if querying it after the write:

Resulting JSON that will get returned on query:

Or a classic example from DevOps:

Now that we’ve written a few points. Let’s take a look at them. Try some of the following queries:

In the results of those queries we notice two columns that we didn’t explicitly write in: time and sequence_number. Those are automatically assigned by InfluxDB when you write data in if they’re not specified. In the UI time is represented as an epoch in seconds, but the underlying storage keeps them as microsecond epochs.

There’s a lot more you can do with the query language. Let’s get to writing some test data to try things out.

Get the average of cpu_idle in 30 minute windows for the last day:

Get the average of cpu_idle for server1 in 30 minute windows for the last day: 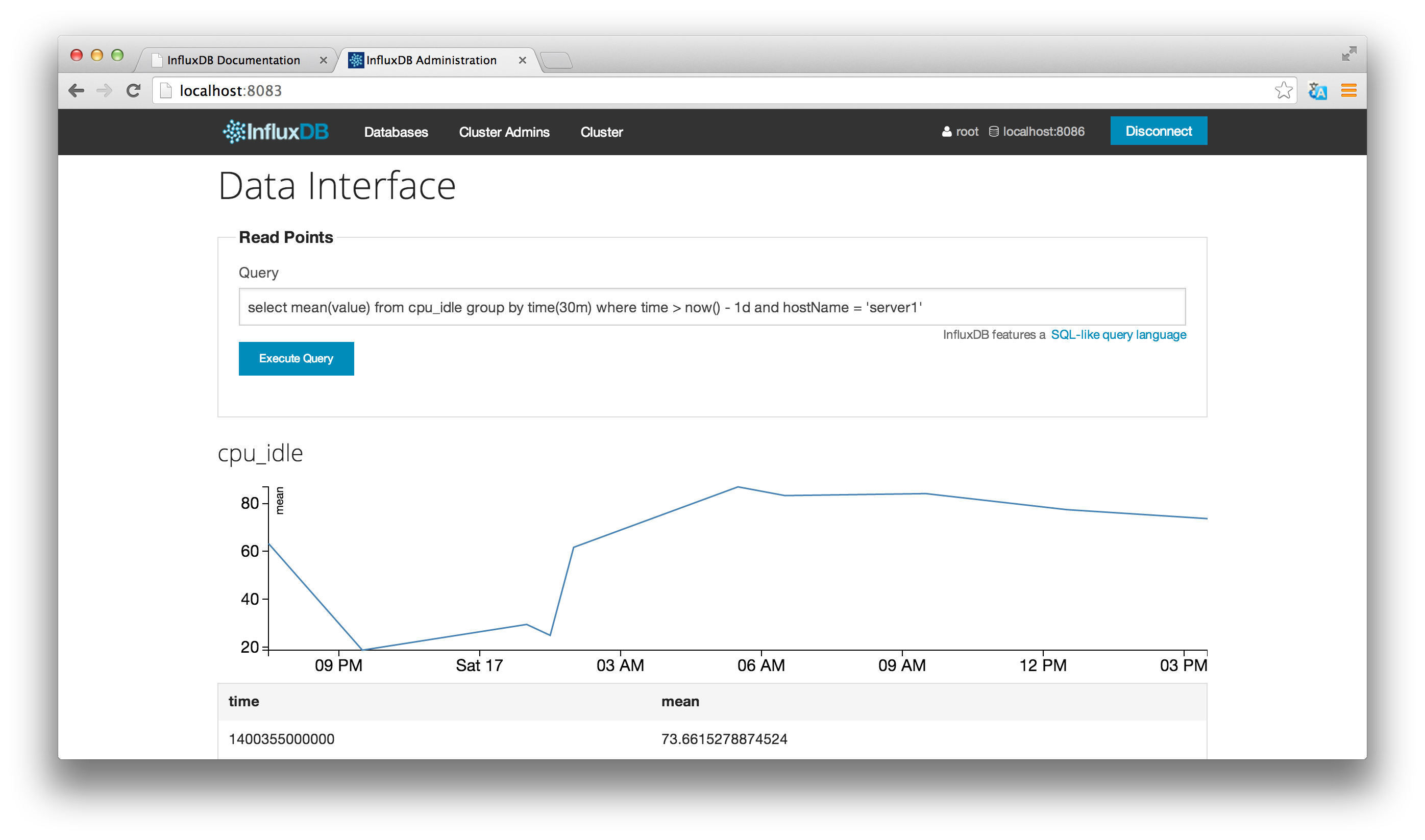 Get the number of data points from the cpu_idle series for the last hour:

Get the number of customer_events in 10 minute windows for the last day: 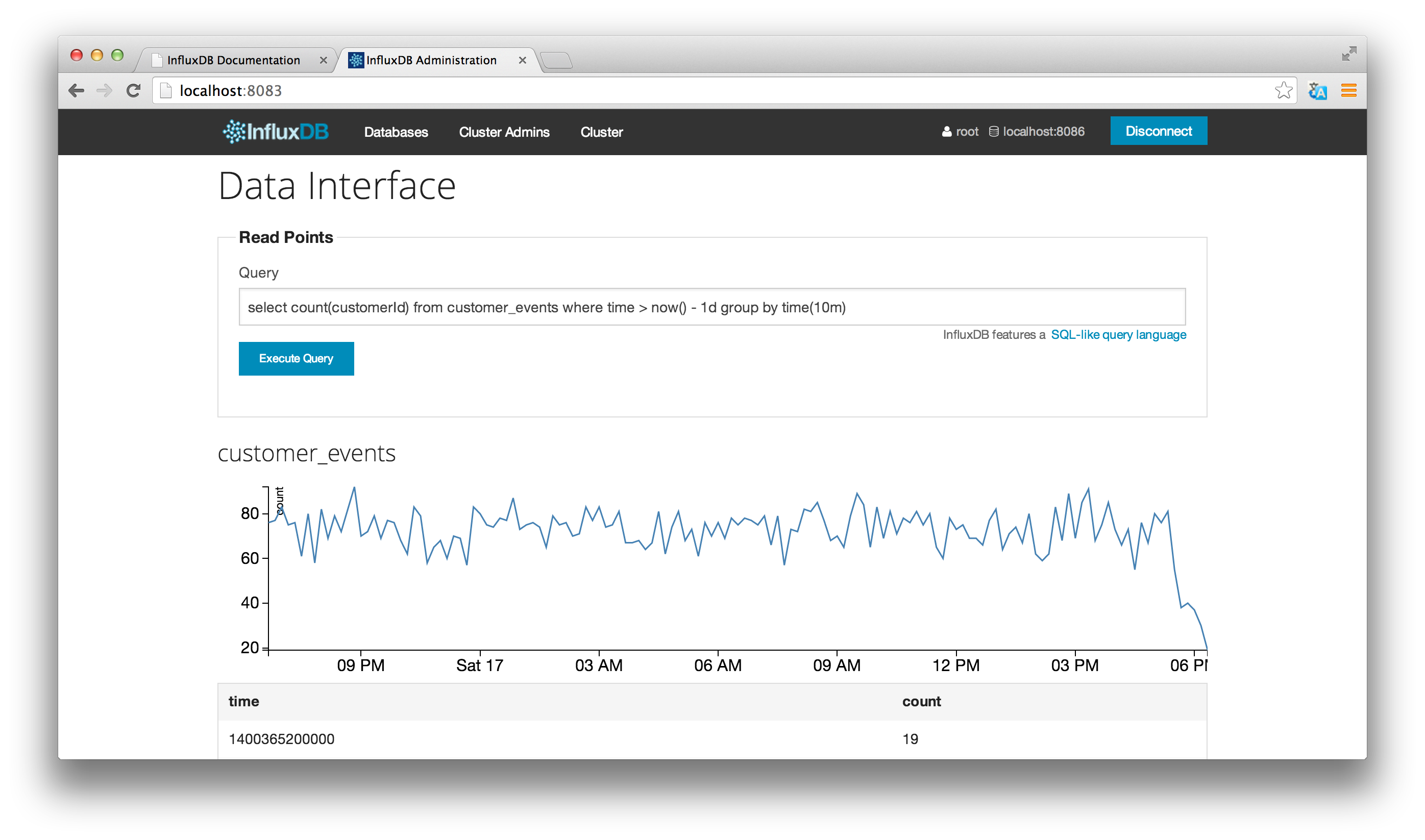 Find the unique customer ids from customer_events for the last hour: 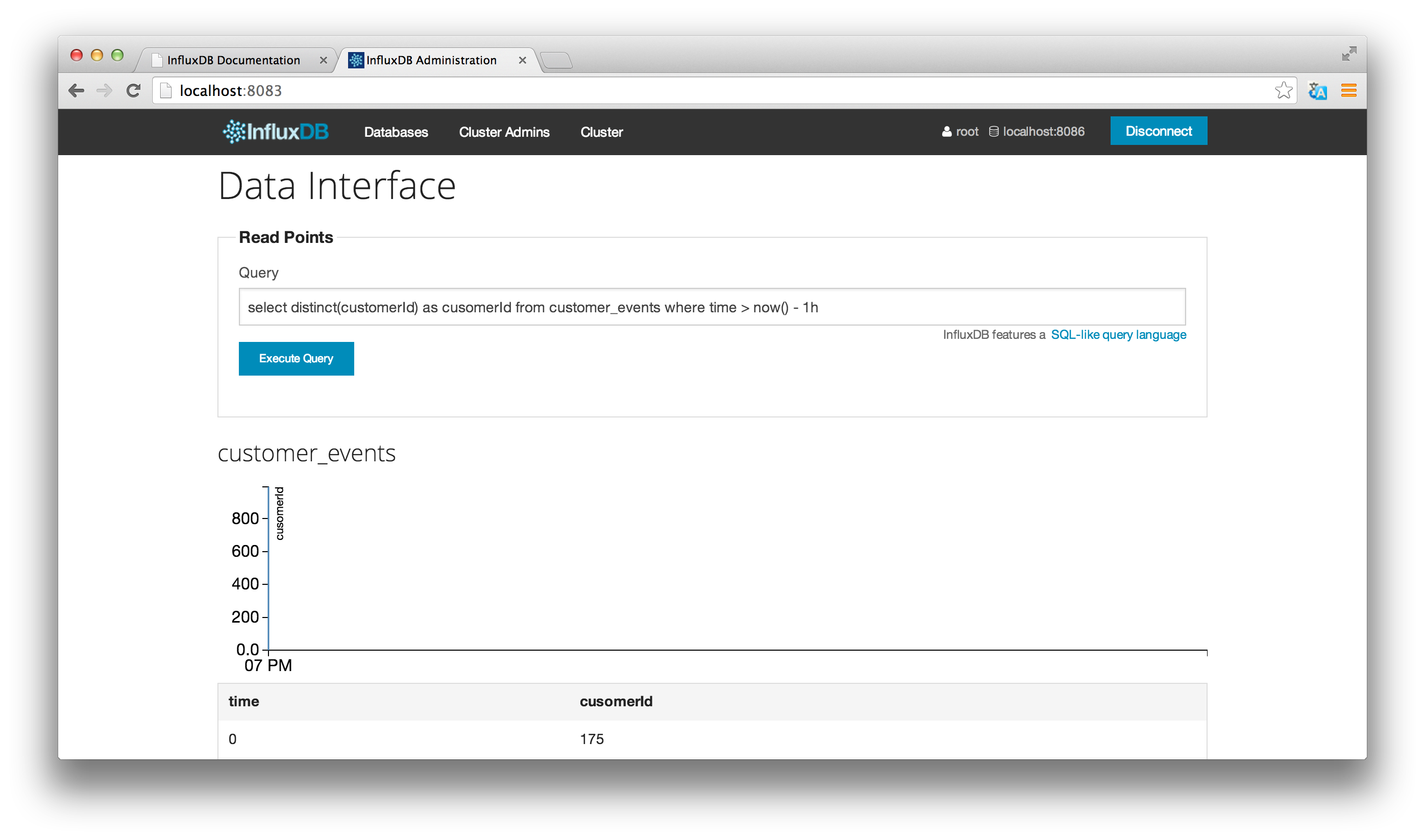 Count the number of customer_events per customer in 10 minute windows for the last 4 hours:

The visualization for this one is off, but you can see the data returned in the table.

Now that you’ve gone through a quick intro to some of the things InfluxDB can do, you may want to pick up one of your favorite client libraries or take a look at the InfluxDB query language guide.

Or take a look at building some beautiful InfluxDB dashboards with Grafana.